Following the success of our pilot survey in Todmorden, in October 2017, we agreed with the Calderdale business team to repeat the survey in Sowerby Bridge, another town affected by the 2015 floods but which had no formal business group representation.

The survey was trialed in early January 2018 and fully undertaken in the town in late January and early February and tailored to the local business sectors.

What we discovered from Sowerby Bridge businesses was that, when asked to choose three of a list of eight business networking activities that would appeal to them, the top three responses were:

A social media group was the top choice in particular for the hospitality sector, businesses with shopfronts/retail premises, and also businesses under 10 years old.

When asked to choose three of a list of nine potential benefits of business networking, the top responses were:

Comments suggested that respondents felt such benefits could be achieved though better awareness of and connections between local businesses who could collaborate to attract visitors and trade to the area, and also increase trade with each other. 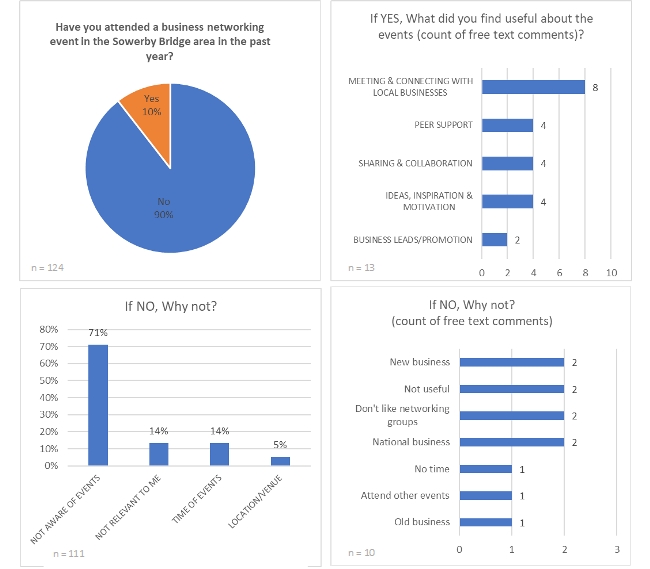 We conclude from this that social media, as a way to connect, is something that businesses in Sowerby Bridge would like to see developed. As with the Todmorden survey, we learned that more informal events are likely to be popular. And again like Todmorden the sense of place is important and opportunities to promote collective benefits would be welcomed. The full report can be read here

A further run of this survey will be undertaken in Elland in March. These insights will help shape the business networks events and group activities.