In September 2019, up to £25m of the government’s Town Deal Fund was allocated for an application by a private sector led Todmorden town deal board. This allocation can only be drawn down by production of a Town Investment Plan (TIP).

“The fund will be used to create new jobs, help to train local people and boost growth, with communities having a say on how the money is spent……we want each place to tell us the balance between those priorities for their town.…..the prize at stake is: people coming together, the public and private sectors working with their communities to set out what their towns can be if everyone pulls together and works together.”

The government designed the fund for towns to develop in their own way, using local expertise to establish a project that the people of each town can buy into. It is our belief that the Town Fund should support the needs and aspirations of the people of the town and should not be used to support the imposition of our local authority’s own priority development plans unless supported by the town with evidence of stakeholder support.

Some towns have had their Town Deal Boards in place since the end of 2019. Todmorden’s was only established in July 2020 and has had much less time to prepare the TIP. However, because the town has been consulted on many occasions it is very clear that there are some shovel ready projects that can already show ‘credibility by consultation’ and which have commanded support over long periods of development inactivity.

We list most of the consultative documents here which can claim in varying degrees to have had serious and meaningful stakeholder engagement. 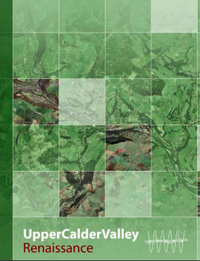 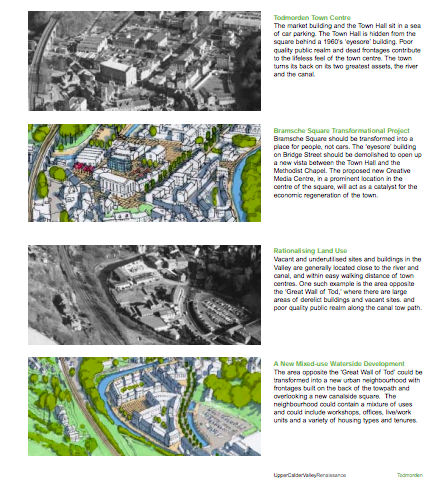 This 25 year plan was created around a sophisticated community consultation process which served as a catalyst for local people to come together, to reflect on the potential of their places and be inspired to become engaged in helping to influence and shape their environment.

“Todmorden Town Hall is hidden from the square behind a 1960’s ‘eyesore’ building. Poor quality public realm and dead frontages contribute to the lifeless feel of the town centre. The town turns its back on its two greatest assets, the river and the canal” 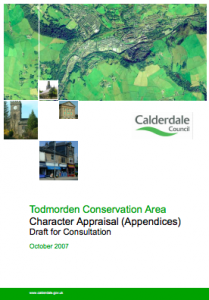 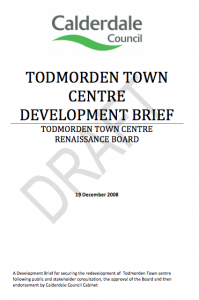 A Development Brief for securing the redevelopment of Todmorden Town centre following public and stakeholder consultation, the approval of the Board and then endorsement by Calderdale Council Cabinet 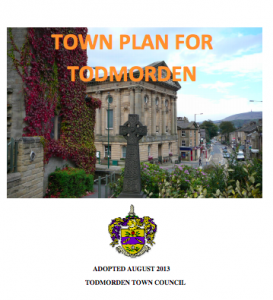 At the start of 2011 Todmorden Town Council embarked on the production of a Town Plan. It wanted to identify the main issues that concern the people of Todmorden and to set out a vision on how the town should develop and reach its full potential. 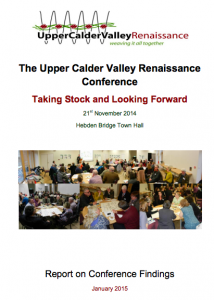 This report summarises the presentations made by the three keynote conference speakers and goes on to set out the findings from the workshop sessions in which conference delegates from community, businesses and councils worked together in six mixed groups. 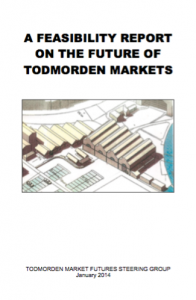 A feasibility report on the future of Todmorden Markets 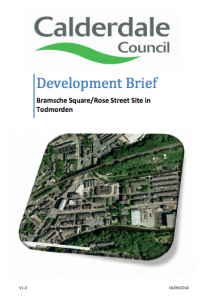 A comprehensive, mixed-use development that creates a ‘sense of place’ for shopping, working, relaxing and living, and which incorporates the creation of a vibrant, multi-purpose, market place in Bramsche Square fit for the 21st century. 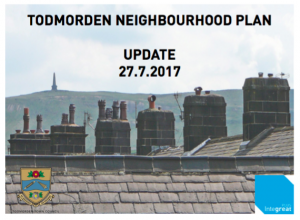 The neighbourhood plan undertaken by the town council will have statutory recognition. There is much evidence of consultation in these documents, adding to the weight of all previous stakeholder engagements.

This study is focused on the Rose Street/Bramsche Square site in Todmorden and was produced to enable Calderdale Metropolitan Borough Council to assess, define and quantify the development opportunities/constraints and potential which exists in this area. 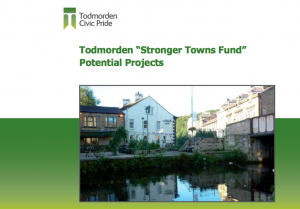 Todmorden Civic Pride, a merged group of Todmorden Civic Society and the original town team, Todmorden Pride, have produced this document to lay out the priorities we feel are overdue and would wish to see considered for funding under the STF